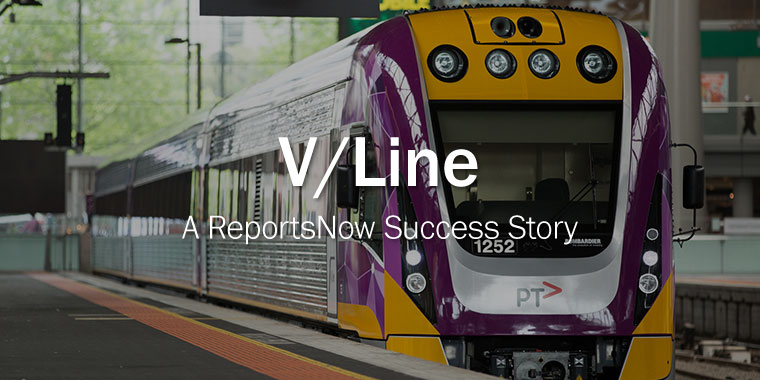 The Challenge: Curing a Case of “Reporting Fatigue”

For some businesses, when it comes to data, more isn’t always better. The average office worker is bombarded daily with hundreds of emails. Sifting through this deluge not only eats up a significant portion of a workday, but also makes it more difficult to focus on the information relevant to work tasks.

The IT team at V/Line coined “reporting fatigue” as its term to describe this potential information overload. As Australia’s largest regional public transport operator, V/Line operates more than 2,000 train services every week. It also maintains 3,520 kilometers of rail track used by both passengers and freight rail services.

Thus, it comes as no surprise the managing of this extensive network of assets, people, and infrastructure generates mountains of business reports. Over time, V/Line employees found themselves wading through a lake of data. As a result, it became easy to overlook critical operational details, producing fruitless manhours and reports destined for the recycle bin.

V/Line turned to ReportsNow for a path in steering its workforce towards using the right data at the right time. Given that ReportsNow built Data Access Studio (DAS) explicitly for JD Edwards environments, it directly accesses V/Line’s most critical data in real time. Just as importantly, DAS affords the flexibility and ease-of-use to tailor reports to the needs of the user — rendering each report precise and relevant to the task at hand.

Next came the implementation of ReportsNow Automator, a tool that automates report scheduling and emailing. V/Line subscribers now automatically receive reports with every update or new version released. This approach gives the advantage of being user-managed where content “owners” administer subscription groups. As certain groups change with new hires, turnover, or attrition, administrators add and subtract members as needed. This reduces the burden of report distribution requests on the IT team.

In many ways, V/Line sees itself as an asset management company which happens to augment public transportation. Given this fact, work order compliance is a major focal point, especially given its emphasis on safety. Utilizing DAS, V/Line ensures maintenance and safety personnel have access to a focused view of vital work order information. As a result, assets are governed in the safest possible manner. With role-based reporting, no corners are cut, and mandatory tasks are now prevented from slipping through the cracks.

In addition to role-based simplification, streamlining reports became another focal point. ReportsNow helps companies simplify reporting processes, no matter their technical aptitude. Streamlining processes in areas such as invoice approval and P&L statement creation frees analysts to spend time on other arduous errands. As a result, V/Line cut the data collection and reporting process time from days to just hours in many cases with DAS.

Another area with potential to utilize their mountain of data was producing functional graphic representations. Data visualization can highlight trends that may otherwise go unnoticed when buried in rows and columns of databases. Utilizing EZShapes, a ReportsNow web-based shapefile manipulation tool, V/Line developed a “body heat map” to better envision commonly reported work-related injuries. Overlaying shapefiles with data from injury reports, V/Line is now able to pinpoint any type of claim and gather a better understanding of its workforce.

Furthermore, these visuals offer the power to link incidents to regional maps within the V/line geographic footprint. With this knowledge, it has the ability to train personnel to avoid common injuries — including those specific to a given region or work site.

Into the future, V/Line explores the combination of internet-of-things technologies with EZShapes.  This effort aims to afford access to real-time performances, locations, and statuses on widely scattered company assets using internet feedback.

V/Line has also gained value from undergoing DAS best practices training from ReportsNow. Consequently, when business users truly require the assistance of IT, they are more capable of submitting comprehensive and precise requests. Through an evolution into knowledgeable JDE users, V/Line is able to drive adoption of native JDE tools — and reduce resources spent on JDE support.

The user base at V/Line relied heavily on its own Excel aptitudes, dependent on IT for custom JDE reports. Users discovered the ability to access JDE data by means of DAS produced reports, proving to be more powerful than the capabilities of Excel. Upon realization that DAS prevents users from “breaking” anything in the JDE system, confidence of report design and creation went through the roof.

V/Line went on to enjoy another feature native to DAS; a clear credibility with auditors as a result of AP, GL, and other reports being drawn directly from the JDE system of record. DAS allows users to create the data- and system-integrity reports to simplify its compliance reporting. Consequently, its IT team is able to spend more time on valuable analysis and less on report creation for auditors.

All in all, for organizations seeking a solution to reporting fatigue, V/Line recommends a “start small” approach. Beginning with the creation of choice reports will demonstrate ease of use and validate the return on investment, producing a proof of concept. The key takeaway is the ability to see immediate improvements in reporting processes without the sizeable investment.


MasterClass is a premier, one-day reporting curriculum directed by ReportsNow experts, custom-tailored to fit your exact educational needs in all disciplines of reporting and business intelligence.  Attend a MasterClass to advance your aptitude in all-things JD Edwards reporting. These gatherings offer the rare opportunity to meet face-to-face with seasoned ReportsNow experts.

MasterClass is designed for anyone utilizing ReportsNow solutions in any professional reporting or business intelligence capacity. It is a first-rate option for all types of customers, ones that favor hands-on instruction, and those that are spread across the country and prefer to congregate for training.

MasterClass is held in select cities across the country, hosted in electrifying venues that provide catered cuisine and sprightly entertainment. It offers the ability to interact with a small group of your peers and grants you access to pick the brilliant brains of our experts.

You will emerge from this first-class course equipped with the knowledge and skillset to become a reporting champion.

This is an non-necessary category.